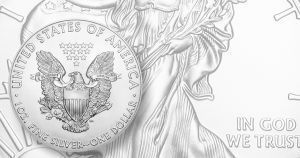 The U.S. Mint is moving ahead with plans to redesign the reverses of the silver and gold American Eagles for 2021 to accommodate the use of anti-counterfeiting technology at the production stage.

Treasury Secretary Steven Mnuchin has given the Mint the green light to replace the designs, which have appeared on the coins since their release in 1986.

“Since the early days of the Republic, the Mint has been very sensitive to the threat of counterfeiting,” Martin said. “We have made progress in developing state-of-the-art anti-counterfeiting measures for bullion coins, and are prepared to implement changes that will enhance the security of the gold and silver bullion coin program.”

Martin said Mint Director David J. Ryder “has assembled an anti-counterfeiting interdisciplinary team within the Mint that is researching and reviewing both overt and covert options to enhance the protection of our bullion products. In addition to improving anti-counterfeiting measures, we are reaching out to educate and inform the numismatic community and consumers about potential counterfeits, thus ensuring continued confidence in our bullion products for years to come.”

Other Mints have acted

The Royal Canadian Mint employs its DNA technology on its Maple Leaf precious metals coins. Its website states: “Every die used to produce the Gold and Silver Maple Leaf coins is laser micro-engraved with an anti-counterfeiting security mark: a textured maple leaf. Our registration process — digital non-destructive activation (DNA) technology — captures images encrypted with a string of codes, and stores these in our secure database.”

It is not publicly known what level of security the United States Mint is pursuing in its anti-counterfeiting campaign to battle the influx of counterfeit American Eagles into the numismatic market, primarily from China.